As a recognised top-tier IT company in South Africa, Zensar’s social development initiatives for local communities complements its business strategy for the region

South Africa is a high-growth market for Zensar, which has built enduring client relationships ever since it set up base here in 2000. This journey of well over two decades has been equally defined by the company’s strong focus on skilling and social upliftment for the country’s disadvantaged youth. “Beyond just capacity building, we have been striving to develop a unique set of capabilities to service demand in the South Africa market and globally, as well,” says Ajay S Bhutoria, CEO and MD, Zensar. Beyond just capacity building, we have been striving to develop a unique set of capabilities to service demand in the South Africa market and globally, as well.

These capabilities cover a much wider span of activity to deliver impact in areas other than just business metrics. Unlike the developed markets of the UK and the US, where Zensar already had a strong foothold, starting out in South Africa was a very different ball game.

This was an emerging rainbow nation at the turn of the millennium – with a developed urban population and underprivileged rural communities that needed to be brought into the mainstream of social and economic progress, irrespective of their race, religion or community.

To address the unique challenges of this developing market, the Zensar team kept the tenets of RPG Group in mind to adopt an inclusive approach to doing business. The idea was to work as a partner for the country’s overall growth, while establishing the business and delivering profits.

We have partnered with relevant NGOs in the region to sponsor the education of underprivileged children and guide them on the path to becoming global talent resources.

While all IT companies had been offering innovative perquisites to be an employer of choice, those actions alone didn’t cut it for Zensar’s transformative aspirations for this region.

After all, this was a nation that had been through a lot of suffering and was ready for a new chapter filled with hope and dreams.

Battered by racial crimes through systematic oppression – also known as Apartheid – from the 1940s till it was finally ended in the early ‘90s, the South African government continues to circumvent the damages and the scars its people will never forget. Zensar dedicated itself towards repairing this past and contributed to shaping South Africa’s future through a holistic model of economic progress.

Not only were Zensar’s actions in line with the South African government’s own larger objectives, it also aligned with the RPG Group's ideals of inclusion, diversity and shared values.

“Creating a sense of belonging cannot be restricted to an organisation alone,” says Harish Lala, SVP & Regional Head, Zensar South Africa. Taking cues from South Africa’s troubled past and the promise it holds, Zensar developed a tailored Learnership Development Programme, designed keeping in mind the inherent capabilities of local talent and the evolving needs of Zensar’s global clients. Integrated into its talent framework, graduates from underprivileged backgrounds soon emerged as drivers of its mainstream business.

All of this helped dispel long-standing misconceptions that only people in developed countries have the talent to participate in global job opportunities. With inclusion as part of its operating philosophy, Zensar piloted a variety of skill development projects among South Africa’s rural communities to successfully demonstrate the untapped potential for social and economic transformation in the country.

With a host of UK-based clients in Zensar’s customer pool, the nearly similar times zones (separated by an hour) worked to its advantage. There were cultural and language similarities, too. Since April 2021, Zensar has had 20 of its South African designers servicing its clients in the UK and eventually taking on clients who are based in the US, as well.

With a customer-first attitude, Zensar South Africa has successfully established itself as a global BPO, and has contributed in positioning the country as a new technology hub for the world, much like India.

The ‘Proudly South African’ company’s most recent recognition as the ‘Top Employer for 2022 in South Africa’ is an extension of this approach and commitment — building local level capability through investment in ground-level economics, while accounting for nearly 12% of Zensar’s global revenues.

Armed with these prestigious accolades, Zensar stays on course to ensure that its best practices evolve and improve as it grows in South Africa. “The more aspects we delve into, the better we end up doing as a company and as an organisation. Building social equity is equally important to our business strategy in South Africa. We have partnered with relevant NGOs in the region to sponsor the education of underprivileged children and guide them on the path to becoming global talent resources,” says Harish. AN ECOSYSTEM OF HAPPINESS

For many years now, Zensar has been checking all the right boxes on a conventional list of how a business should operate in a host country’s economy and become part of its social development agenda.

Apart from being recognised as a leading and progressive global IT company, Zensar boasts of a talented and diverse workforce in every country it has a presence in, while the several industry-specific awards it continues to win across the world vindicate its sustainable approach to business. Not surprisingly, the South Africa market also resonated with this philosophy, and welcomed Zensar long before it actually launched its local developmental initiatives.

Today, South Africans feel happy and proud to be associated with the company. Their sense of happiness is rooted in Zensar’s dedication towards helping build a future-ready nation — this is a value that cannot be monetised.

As Harish puts it, “After all, what is better than contributing to your own country, society and community by being a global talent hub?” 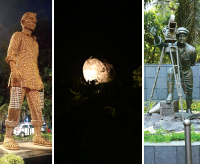